Doola, a startup that aims to help global entrepreneurs form a U.S. business, has raised $3 million in seed funding.
Doola actually started its life in 2020 as StartPack as a pivot from another startup called Standups. During that pivot process, the team realized that it didn’t want to go through the “complex and time-consuming” process of setting up the full-stack of software and accounts needed to get a business off the ground.
“We wanted to focus on building product, talking to users and growing our new business, and we thought, ‘what if we could click a button and initialize a company?’,” said co-founder and CEO Arjun Mahadevan. In September, the New York-based company built an MVP and got its first paying customer. It recently rebranded from StartPack to doola.
Doola’s mission is to support its customers through the incorporation process so they can “confidently collect payments, build credibility, stay legal and make more money,” said Mahadevan, a former growth product manager at Dropbox. Specifically, doola provides company formation, an EIN (employee identification number), a U.S. address and bank account, access to U.S. payments, a free tax consultation, U.S. tax support, a phone number and $50,000 in startup “perks.”
So far, hundreds of companies have formed LLCs with doola — even without a U.S. Social Security number. And the company is “growing profitably from a unit economics perspective,” according to Mahadevan. 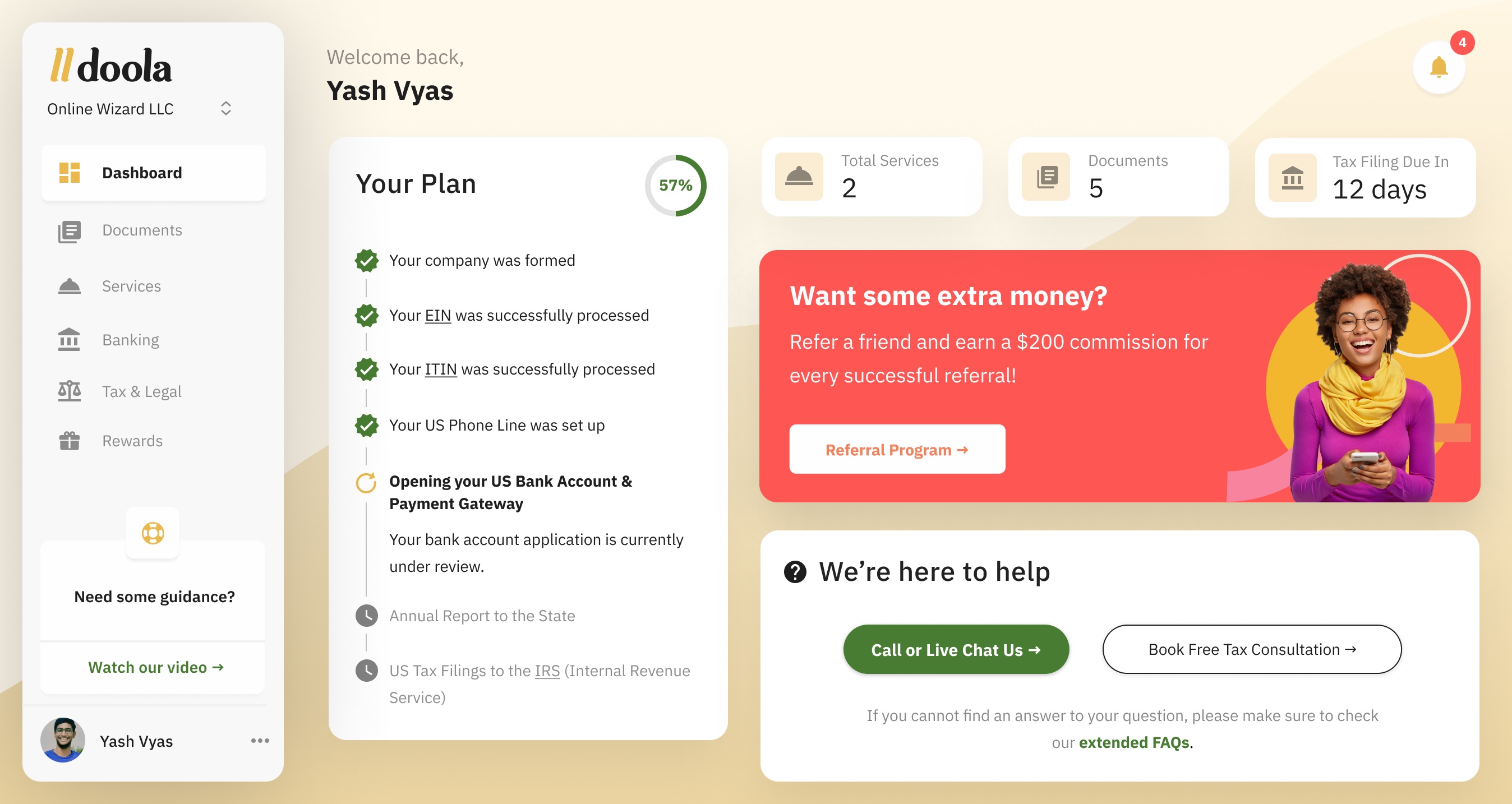 Image Credits: doola
What makes doola stand out in the space, according to Mahadevan, is that it doesn’t just help a founder incorporate and leave them to fend for themselves.
“We’re not just a formation service, we’re a full-service fintech company,” he told TechCrunch. “Formation is our wedge to build the operating system for creators globally: from formation to financial to legal stack, by providing technical, educational and personal support every step of the way.”
And if there are things that doola can’t provide in-house, it works with partners such as Amazon and Twilio to help, Mahadevan said.
Nexus Venture Partners led doola’s financing, which brings the company’s total raised to $3.6 million. The startup participated in Y Combinator’s summer 2020 batch and also counts as backers Hustle Fund, XX, Psion Capital and Translink Investment, as well as a high-profile group of angels, including Jacqueline Reses, former head of Square Capital; Dharmesh Shah, founder and CTO at HubSpot; Ankur Nagpal, founder at Teachable and of Vibe Capital; Rohini Pandhi, product manager at Square and partner at Transparent Collective; Arjun Sethi, co-founder and investor at Tribe Capital; and Prasanna Sankar, co-founder of Rippling.
Doola plans to use its new capital to scale its team. Besides Mahadevan and co-founder and CTO JP Pincheira, doola has 14 employees. The capital will also go toward product and engineering.
Nagpal noted that the creator economy is booming, with more than 50 million people becoming creators in the last decade — and those creators becoming businesses in the coming decade. He believes doola is poised to help such global businesses.
“doola makes it incredibly easy for anyone, from anywhere in the world to set up a US-based LLC, get a US bank account, with access to all the payment products and financial services typically reserved for US-based businesses,” he wrote via email. “What intrigues me about this business however is not this initial beachhead of business formation, but the longer-term opportunity they have to handle all the unsexy business management pieces for creators and independent entrepreneurs around the world — including incorporation, banking, taxes and other critical pieces of infrastructure.”
Jishnu Bhattacharjee, managing director of Nexus Venture Partners, agrees. He joined doola’s board as part of the financing.
“Creators and independent entrepreneurs want to focus on their crafts that they love. However, to build businesses around their crafts, they would also need to take care of unexciting but necessary backend business management functions, for which they usually do not have expertise, nor interest, nor the time those activities demand,” he wrote via email. “doola is set to address just that: so solo-preneurs can do what they love and are best at, while doola takes care of the rest.”